The Algorand (ALGO) network has experienced an impressive uptick in total accounts of 35.5% since the year began.

The aforementioned growth on the Algorand (ALGO) is attributed to continual development on the network.

To begin with, earlier this month, the team at Algorand announced the release of its most recent technical upgrade meant to allow developers to create complex dapps with ‘smart contract-to-contract calling and network participants can take their first step towards trustless cross-chain interoperability with quantum-secure keys for the upcoming State Proof technology’.

Secondly, the most recent upgrade of the Algorand mainnet comes only weeks after the Algorand Foundation launched a $20 million incentive program focused on developer tooling and compatibility with the Ethereum Virtual Machine.

Algorand Appoints a New CEO and Catches the Attention of Grayscale

Also in February, Algorand announced the appointment of Staci Warden as the project’s Chief Executive Officer. Ms. Warden has a vast background in finance and ‘has led global teams at the Milken Institute, JP Morgan, the Nasdaq stock exchange, and the U.S. Treasury Department’.

Ms. Warden expressed optimism with her new role explaining that ‘1.7 billion people in the world do not have access to finance, and the Algorand protocol has the speed, the security, and the decentralization to address the problem of global financial inclusion at scale’.

Also worth mentioning is that the team at Grayscale Investments had announced earlier this year, that it had added Algorand (ALGO) to its list of assets under consideration for possible addition to its future investment products.

ALGO/USDT is in a Downtrend at the $0.72 Support Level

With respect to price action, the daily ALGO/USDT indicates that the digital asset is currently in a downtrend. At the time of writing, ALGO is trading at $0.73 and below the 50-day (white), 100-day (yellow) and 200-day (green)  moving averages. 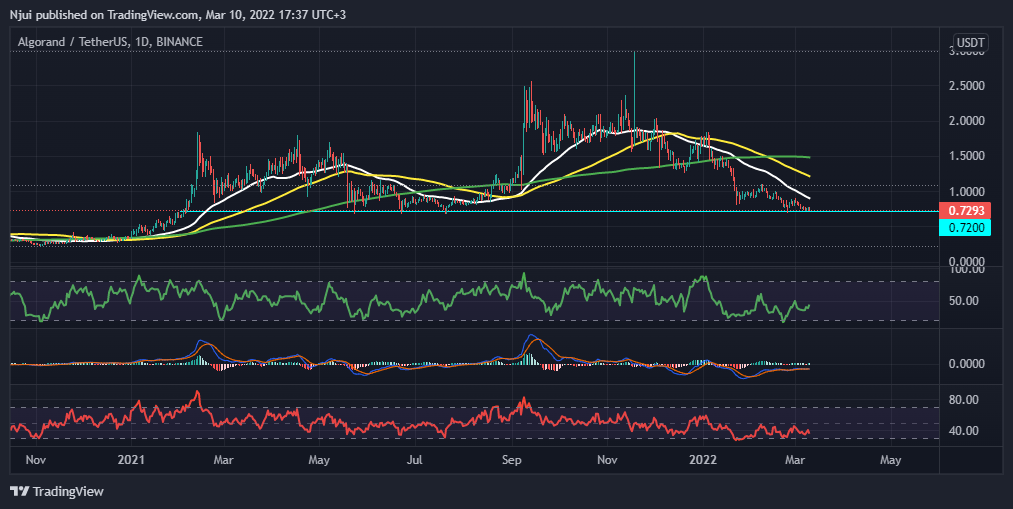 Additionally, ALGO/USDT is currently defending the important $0.72 support level that could determine whether it falls to lower levels.

Furthermore, ALGO’s daily MFI and RSI are in neutral territory at 44 and 35 respectively. The daily MACD is also indicating reduced buying of Algorand (ALGO) thus increasing the likelihood of more losses in the days to follow.

STRIPE The Global Payments Giant To Accept Crypto And NFTs

($SHIB) SHIBA INU In Discussions For Adoption in Turkey

Yesterday, May 21st, CZ held an AMA (Ask Me Anything) session on the r/Cryptocurrency subreddit page.

For one hour, the CEO of Binance answered various questions spanning different topics in the crypto-verse, such as crypto adoption, the future of the Binance Smart Chain, and the recent events surrounding Terra (LUNA) and TerraUSD (UST).

With respect to LUNA and UST, one community member known as u/emptystats asked CZ whether he would consider bailing out UST and taking over from Do Kwon as the head of Terra (LUNA).

According to u/emptystats, all CZ had to do was invest $3 to 6 billion to partially collateralize the remaining 10 billion UST. In return, Binance would get a significant allocation of the new LUNA tokens after the planned hardfork. Furthermore, there would be an additional mechanism whereby to redeem UST, users would have to buy and unlock BNB for three to seven years.

u/emptystats concluded that such an act from CZ would make him the most beloved man in the crypto space, and he ‘would likely make money too with BNB forced to be bought and locked.’

In his response, CZ stated that he was humbled by the request, but such a scenario was unlikely given how busy he is already. He said:

I am humbled by such a request. Thanks for the trust in me. But short answer is: unlikely.

I am pretty busy already, and algo stable coins is not my speciality. We should each do what we do best. I hope the community eventually settle on a good solution, and we will be here to support it.

Exact Details of the Pending LUNA Airdrop Will Be Worked Out

Concerning the possible hardfork of Terra into Terra Classic (LUNC) and a new Terra (LUNA) chain, CZ was asked whether Binance will distribute the new tokens according to individual user balances of the old tokens during the snapshot.

In his answer, CZ clarified that Binance ‘works hard to ensure users that hold coins/tokens on our exchange can receive airdrops intended for holders.’ He also added that ‘the exact details will be worked out after there is an official consensus on what the Terra team plans to do.’

LUNA and UST investors cannot seem to catch a break as malicious actors have been capitalizing on the recent events surrounding both digital assets to post fake proposals on Terra Station, with additional links to phishing sites.

Furthermore, the fake proposals claim to lead users to a preview of Terra 2.0 and Dapps launched by the team at Terra, while in reality, they are out to steal from the community.

2/ In addition, we have also seen a rapid increase in spam proposals as the discount on $LUNA made it economically cheap to post anything one desired. pic.twitter.com/dd524u8ndk

The Cheap Value of LUNA Makes it Easier to Purchase Enough Coins to Submit Fake Proposals.

According to the team at Terra, the significant low price of Terra (LUNA) has made it possible for scammers to purchase vast amounts of the digital asset to carry out their phishing attacks.

New Terra Proposals To be Added to an Allowlist

Consequently, the team at Terra will now add proposals to an allowlist as they try to find a more sustainable solution to the situation. The Terra team also clarified that their end goal is not to censor viable proposals but to protect users from scams. They said:

Our goal is not to censor viable proposals, but rather to protect users from scams & ensure an excellent user experience. For those who would like to view all proposals, including potential scams/spam, simply click the “Show all” button on the “Governance” page on Station.

IMPORTANT. Clicking on the “Show all” button may reveal potential scam proposals. Please beware of these types of posts to keep your funds safe.

To note is that the Terra Community is currently voting on proposal 1623, which is geared towards forking the chain into Terra Classic (LUNC) and a new chain of Terra (LUNA).

Mid-last week, 90% of the Terra community were for the proposal, with Do Kwon adding three quick amendments by Friday, May 20th. However, a glance at the ongoing voting on Terra Station reveals that only 66.31% of the votes cast are now for the modified proposal.

At the time of writing, a total of 252.745 million votes have been cast, with 167.606 million for proposal 1623. The vote has already passed the minimum 50% threshold needed to sail through. Therefore, it can be concluded that the Terra Community will go along with the proposal to fork the chain despite there being three more days of voting left.

Crypto is Worth Nothing and Based on Nothing, Says ECB President Lagarde

Christine Lagarde, the European Central Bank President, has said that cryptocurrencies are based on nothing and should be regulated to protect people from the possibility of speculating over them with their life savings.

Ms. Lagarde made the comments during a Dutch television discussion where she also added that digital assets are not backed by anything as an anchor. Her exact statements on cryptocurrencies were as follows:

[I’m concerned about people] who have no understanding of the risks, who will lose it all and who will be terribly disappointed, which is why I believe that that should be regulated.

My very humble assessment is that it is worth nothing, it is based on nothing, there is no underlying asset to act as an anchor of safety.

A Digital Euro Would be a Safer Bet

Ms. Lagarde also admitted that she does not hold any cryptocurrencies because she wants to practice what she preaches. She, however, was optimistic about the prospects of a Digital Euro being a safer alternative. She said:

The day when we have the central bank digital currency out, any digital euro, I will guarantee — so the central bank will behind it and I think it’s vastly different than many of those things.

Concerning the feasibility of a Digital Euro, the EU Commission on a Central Bank Digital Currency within the region is still accepting comments from industry experts on the topic.

Patrick Hansen highlighted this fact through the following Tweet. Mr. Hansen is a crypto venture advisor at Presight Capital and has on numerous occasions provided valuable insights on the status of digital asset regulation in Europe.

If you don’t share Christine Lagarde’s opinion that the digital euro is the way forward, you still have three weeks to raise your concerns in the EU commission CBDC consultation – deadline June 14. https://t.co/p5eMF5ySo5

The deadline to submit statements on the topic of a Digital Euro is June 14th, and the following individuals and entities are encouraged to submit their opinion on the matter.

Concerning the object of the consultation for a digital euro, the EU Commission tasked with the process explains that it is meant to ‘ to collect further information on expected impacts on key industries (financial intermediation, payment services, merchants), users (consumer associations, retailers’ associations), chambers of commerce and other stakeholders in international trade.’

Crypto is Worth Nothing and Based on Nothing, Says ECB President Lagarde

CZ Debunks WSJ Article on Insider Trading, States Binance Has a Zero-Tolerance Policy on Such Activities